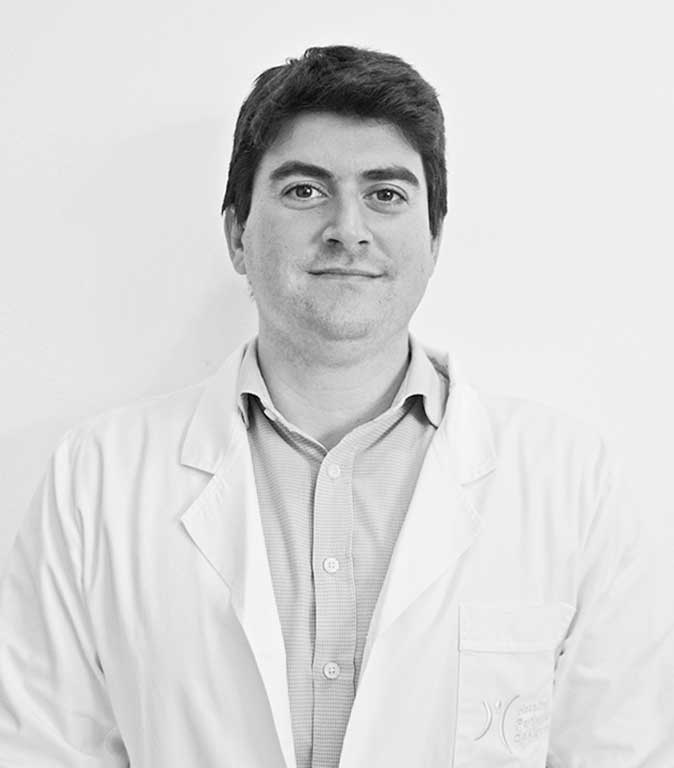 Amongst the complications of diabetes, retinopathy is the main cause of avoidable blindness in the population aged between 20 and 64, which is a sufficient reason to warrant regular monitoring.
Diabetic retinopathy usually develops without any visual signs. However, 98% of type 1 diabetics and 50% of those with type 2 exhibit lesions after 20 years. It is of vital importance that the diagnosis be made in a phase when treatment is still possible and efficient, through periodic and systematic ophthalmologic observation and the respective treatment.

1. What is the extent of diabetes in Portugal and in the rest of the World?
According to the latest report by the National Diabetes Observatory, its prevalence in the Portuguese population aged between 20-79 (7.7 million people) is 13.3%, which means that more than one million Portuguese suffer from this disease. Between 2000 and 2015, 584,916 new cases of diabetes were diagnosed in Portugal, and the World Health Organisation estimates that in 2030, over 500 million people worldwide will be affected by this disease.

2. What is diabetic retinopathy?
Commonly known as “diabetes of the eyes” (an incorrect term), diabetic retinopathy is the alteration of the cytoarchitecture (anatomy) and function of the retinal structures, in response to vascular damage and consequent inflammation, influenced by several factors. Around 25% of diabetics show some form of diabetic retinopathy and of these, 2-10% have diabetic macular edema (prolonged excess of sugar in the blood that provokes edema in the ocular blood vessels). This is the complication responsible for the greatest number of cases of loss of visual acuity among those affected by diabetic retinopathy.

4. Is it possible to prevent diabetic retinopathy?
As mentioned in the previous point, careful metabolic control of your disease by your family doctor, internist or endocrinologist will delay the start of ocular complications. However, despite the best care and control, the longer you are diabetic, the greater the incidence of diabetic retinopathy will be.

5. If i am diagnosed with diabetic retinopathy, will i go blind?
Diabetes is considered the principal cause of blindness in the active population in industrialised countries. Diabetic macular edema is the leading cause of loss of visual acuity and proliferative retinopathy (a more serious form of diabetic retinopathy) is responsible for the most pronounced visual impairment. Nevertheless, the most efficient weapon to combat this scenario is early diagnosis (before the appearance of the first symptoms and complications).

6- How is diabetic retinopathy diagnosed before its symptoms and complications?
Through careful exams by an ophthalmologist, it is possible to identify lesions on the retina even in the initial stages of the disease. Generally, after an initial contact the patient is referred to professionals with experience in managing diabetic retinopathy. The classification of the disease is of the utmost importance because it will determine the type of treatment.

7. What diagnostic methods are used in the evaluation and classification of diabetic retinopathy?
Several types of complementary exams are used. In assessing a diabetic, it is imperative to assess the lesions on the mid and peripheral retina and at the same time rule out the presence of diabetic macular edema (a complication closely related to the loss of visual acuity). The exam known as fluorescein angiography is still one of the essential contributions for identifying the number and degree of lesions on the retina (especially those that are invisible in an ophthalmic exam). Another basic test, especially for assessing the macula (area of the retina with the greatest number of photoreceptors essential for good vision) is called an OCT (optical coherence tomography). It has the capacity to analyse the different layers of the retina in high detail, thus allowing for early diagnosis of macular lesions before they are linked with the loss of visual acuity. The most recent generation of OCT with Swept Source technology (OCT-A) produces images similar to those of a classic angiograph, but without the need for using intravenous contrast. According to the number and location of the lesions that are observed, we classify the disease and treat it according to this indication.

8. How is diabetic retinopathy classified?
Using the data collected from the direct fundoscopic exam or through retinography, this classification has been developed: 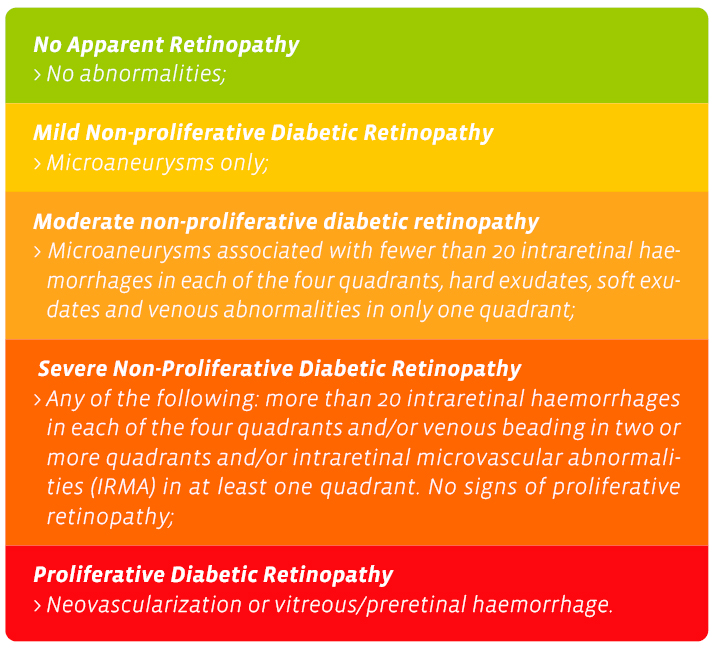 9. When is it necessary to treat diabetic retinopathy?
This is a complex subject. However, generally speaking, most ophthalmologists decide to begin treatment when the disease is classified as severe non-proliferative retinopathy (international clinical classification) or when there is diabetic macular edema. Other complications, such as peripheral retinal ischemia and neovascularisation detected in fluorescein angiography, influence the start of specific ophthalmological treatment. Any complication related to proliferative diabetic retinopathy is generally the target of priority treatment.

10. What treatments are available?
Depending on the patient’s retinal lesions, the ophthalmologist can suggest different forms of treatment. As previously explained, the majority of the cases of loss of visual acuity are associated with diabetic macular edema. Nowadays, the best results obtained in the treatment of this condition are noted through intravitreal anti-VEGF therapy or intravitreal corticosteroids, both of which are administered in antiseptic conditions in the operating theatre. Other options include retinal photocoagulation and vitreoretinal surgery.