HPM Celebrated Its 1st Anniversary
A Year Of Experience, Innovation And Quality 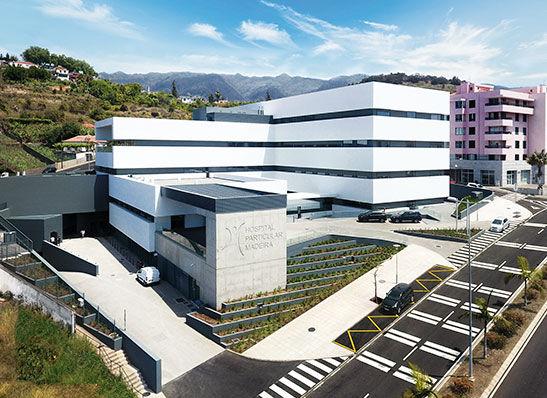 One year has gone by since the inauguration of the Hospital Particular da Madeira which was celebrated on the 30th of May. A year marked not only by innovation and quality, but also a year marked by unforeseen events, which tested our resilience and ability to overcome numerous challenges.

In this its first year of existence, the HPM has already achieved two major feats: sustainably developing a wide range of high-quality medical services and facing a pandemic never before experienced, with both dedication and professionalism.
But, none of us should forget what was learned from this strange experience, it is important to remember what was done for the health of the population of Madeira and praise the work of the fantastic teams working at the HPM. Let's look back on this first year of experience and innovation.

MAY
As a result of the organizational complexity of managing the opening of a new hospital, the specificity of the services and, above all, the safety of the medical care it provides, the opening of a Hospital is always phased out.
Although the HPM, was no exception to this rule, it managed to open its doors with almost 80% of its total capacity and with several services operating 24/7: Adult Emergency Unit, Clinical Analysis Laboratory, Imageology Department, Operating Theatre, ICU and In-Patients Department.
On the 30 th of May we opened the doors to the population of Madera. This day will be remembered for various reasons including the challenges that the future held in store for us. It was on this same day that Geral Surgery, Intensive Care, Anaesthesiology and Internal Medicine, as one team, treated their first critical patient. It was undoubtedly a stressful event and a test for all those involved, ending with the patient once recovered and discharge, able to return to his country of origin. From this first experience we were able to foresee what our immediate future would be.

JUNE
It was in the month of June that the first procedures were carried out in the Hybrid Operating Theatre. This type of Theatre is currently a worldwide trend, where it is possible to perform surgical and non-surgical interventions and procedures, using high definition imaging equipment and advanced software systems. The HPM Hybrid Theatre, is prepared for differentiated interventions in Cardiology, Vascular Surgery, Neurosurgery and Neuroradiology.
And because summer had arrived, plastic surgery took off at the HPM, with a wide range of surgical procedures being carried out, including procedures in Aesthetic Medicine.

JULY
We dedicated this month to our younger patients with the opening of our Paediatric Unit. This Unit was built with our young patients in mind, with all the comfort and amenities they need. To the excellent team that transferred from MMC, more elements were added making it possible to have an additionally structured department offering paediatric subspecialties in; Neuro Development, Allergology, Gastroenterology, Cardiology, General Surgery and Neonatology.

AUGUST
Known as the holiday month, two important services opened during this month, the Oncology Day Hospital and the Women's Health Unit, ensuring that treatment need not be interrupted during a holiday abroad. With dedication and commitment, we providing continuous differentiated health care to our patients.
It was with the utmost professionalism and dedication that we carried out the first cancer treatment. We also became prepared to fully respond to the needs of women's health, in a personalized and especially dedicated wing, where are also situated the Maternity Unit and the Delivery Room.
It was also during this month that the Gynaecologists began Laparoscopic Surgery.

SETEMBER
September being serenity month, also saw the birth of the first HPM baby, proving that “we know how to assist in the birth of your greatest love”.
But September was also the month of hearts. Our first Cardiovascular Screening took place. In addition to being successful as far as the number of participants was concerned, it was also possible to demonstrate one of the pillars of our practice: promoting health as a holistic and global approach.

OCTOBER
This month, the heart was once again our hero. During this month began cardiovascular intervention procedures in the Hemodynamic Laboratory with the first diagnostic catheterization.
Cardiology is in fact one of the areas of greatest differentiation, both in terms of diagnosis and intervention, due to its excellent teams of professionals. The HPM will probably be the unit that performs the greatest diversity in Cardiology Exams in Madeira: Cardiac Angio CT Scan, Cardiac MRI, Cardiac Ultrasound, Transesophageal Ultrasound, Stress Echocardiography, Effort Ultrasound, MAP, HOLTER, Heart Stress Test, and also Cardiovascular Disease Intervention Procedures such as Catheterizations, Transcatheter Valve Implants (TAVI) or Angioplasties.

NOVEMBER
This month was coloured blue for urology. Our first Prostate Cancer Screening was held on the 13th and 14th of November. During this month the first innovative surgery for the treatment of renal lithiasis was performed. In fact, Retrograde Intrarenal Surgery associated with laser lithotripsy was performed for the first time in Madeira. The great technological evolution of this procedure is due to the state-of-the-art endoscopes and optical systems, one of the areas where a substantial investment was made by the HPM.
There was still time in November for further innovation: the beginning of the Gastroentorology exams by Endoscopic Capsule Enteroscopy known as Videocapsule. This exam permits a total visualization of the digestive tube, which is not always accessible by conventional endoscopic methods.
November was indeed fruitful in innovation and differentiation, ending with the Haemodynamic Unit and the first Cardiac Angioplasty. 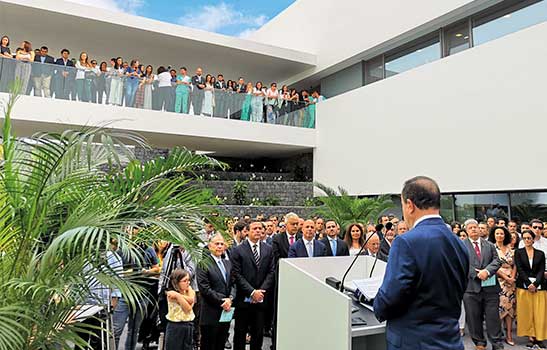 DECEMBER
We did justice to the month of gifts and presents. The first “gift” arrived on four wheels and was the beginning of our Ambulance Transport Service.
The Maternity Unit began its first “Symposium on Parenting” Workshop, and also introduced the new service “NASCER HPM”, a comprehensive service for monitoring pregnancy and parenting, dealing with various themes. December being the month of affections and to speak of affections we need to speak of the heart. The Team of Cardiologists and Cardiothoracic Surgeons scored once again. This time, with the first lung cancer thoracic surgery as well as a record number of Angioplasties.
December also being the month of solidarity, HPM and MMC joined forces to support the same solidarity association: Operation Red Nose (1€ donation per Red Nose). Employees and patients donned red noses for a day, raising money to support this association.

JANUARY
New Year and New Innovative Urology. This team has made history once again, when they performed for the first time in Madeira a Radical Prostatectomy by Laparoscopy. This is the best surgical option for a localized prostate carcinoma. Laparoscopic techniques, being minimally invasive, result in numerous advantages for the patient.

FEBRUARY
This was the month when we organized the Obesity and Metabolic Diseases Team, which includes, in addition to Specialist Surgeons, an Endocrinologist, a Psychologist and a Nutritionist. The first bariatric surgery was immediately performed by this team.
In the beginning of the year the first breast biopsies by stereotaxis were also perform. These percutaneous interventions guided by imaging techniques, are much superior when compared to conventional biopsies due to safety and diagnostic accuracy.

MARCH
And we thus arrived at the month that would change the world, but in time to make a difference and provide someone with a longer and better life. Cardiothoracic surgery was again at the forefront with a highly complex intervention: repair of the mitral and tricuspid valves with the closure of the left auricular appendage.

APRIL
April was not an April Showers month but a month of resilience and learning. It was the time to recognize the professionalism and knowhow of the teams working "behind the scenes", ensuring that everything ran smoothly.
For this reason this month has been dedicated to the exceptional work of the Infection Control Commission (of the HPA Health Group) that in record time issued standards, set up circuits, isolation measures, contingency plans, triage centres and all that was necessary to ensure everyone’s protection to guarantee zero contamination of patients and employees.

These were some facts that marked the history of the first year of HPM, to fulfil the mission and commitment that we assumed from the beginning: to serve our patients with quality and safety, here and now. Because your health is of particular importance. 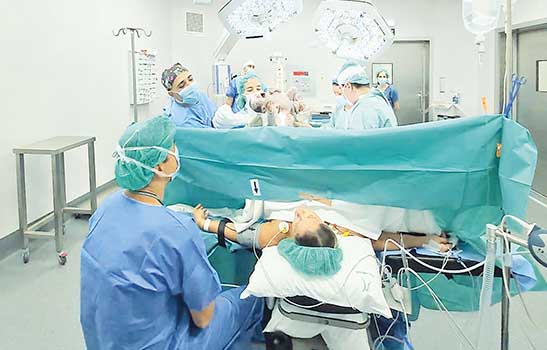