General Surgeon and Medical Director of the Hospital Particular in Gambelas 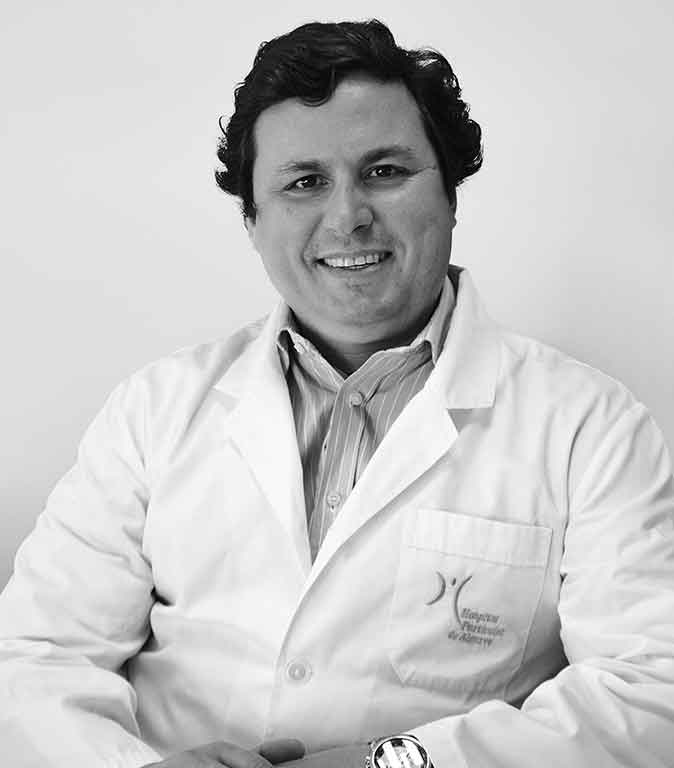 
Treating a patient is often associated with the act of inflicting pain in order to save a life. From the beginning of time the act of treating disease is often associated with the need to inflict pain in order to obtain results and cure the patient. But even though the patient recognizes the necessity of pain associated with treatment, it is often the reason why treatment is refused.
In recent decades, the search for a cure of a certain disease has been influenced not only by the major objective of solving the patient’s problem but also by the need to cause the least pain possible, while at the same time obtaining the same results

MORE DIFFERENTIATION AND INCREASED TECHNICAL DEMAND, RESULTING IN LESS PAIN AND A SHORTER RECOVERY PERIOD.
Primun non nocere (Hipocrates 460AC-377AC) continues to be a principle that guides medical practice today, for the good of the patient and to avoid wrong doing. It was based in this concept that in France in 1981, after several decades of developing equipment and technology that the first laparoscopic surgery was performed (surgery of the appendix and Gall bladder).
In Portugal, video-assisted surgery (also known as laparoscopy), took its first steps in the early 90’s,with several hospitals carrying out the more common procedures: cholecystectomy, diagnostic laparoscopy, appendectomy, gynaecological surgery, etc.
This new surgical option, quickly gained the acceptance of both patients and physicians as it was not only less painful, it also meant fewer operative risks, a quicker recovery period and return to normal living activities as well as a shorter convalescence period.
But as is normally the case, whenever something totally new comes along, some voices were raised concerning this new technique, claiming that it meant additional risks for the patient, more surgical errors and a higher mortality rate.
The last 25 years have proven the contrary. Presently video-assisted surgery is at the moment considered the Gold Standart for the treatment of numerous pathologies. We must not forget that this surgical technique requires greater manual dexterity and visual perception in both 2 and 3D, and therefore requires a longer learning period. This fact led many surgeons to alienate themselves from this technological advance and they became the main detractors of this technique.
In the Hospital Particular this technique was implemented in early 2000 and became the first hospital in the Algarve to carry out laparoscopic surgery and to carry it our systematically, involving almost all medical specialties.
Although the Algarve is considered a peripheral region and in many fields forgotten when compared to other main cities, in the HPA Health Group this is not the case. Staff training in these technical areas has been encouraged, acquiring the necessary equipment and technology and the correct implementation of video surgery and new techniques has always been a priority. Laparoscopic techniques are nowadays used in the diagnosis and treatment of countless diseases.

FROM DIAGNOSIS TO CURE
Video Surgery was initially uses as a means of diagnosis for observing the human body through its various orifices. At the end of XIX Century periscopes were used to see inside the human body. The first one was called a celiscope and was used to see inside the abdomen, stomach and bladder. Since then huge advances have taken place in this area and nowadays a great number of medical specialties use video endoscopy to diagnose, evaluate and treat a vast number of diseases.
In the past, whenever a therapeutic option meant that the patient needed to be submitted to surgery, this implied a painful process, slow recovery and a long period of convalescence, meaning a long time off work and social life.
Inevitably associated to this were greater personal and social costs, with longer periods of sick leave and in many cases early retirement for the patient. With the introduction and widespread information on video surgery techniques used in various procedures and medical specialties, this paradigm has changed considerably.

GASTROENTEROLOGY
Digestive endoscopy such as Upper Digestive Endoscopy or Colonoscopy, are carried out by the gastroenterologists to identify and evaluate diseases of the pharynx, oesophagus, stomach, duodenum and colon. Associated techniques such as Endoscopic Retrograde Colangiopancreatography (commonly known as ERCP) and endoscopic ultrasound allow further evaluation and treatment of diseases of the billiary tract as well as cancer of the oesophagus, stomach, pancreas and rectum, being an important aid in the correct perception and diagnosis of malignancies in these organs. The possibility of identifying cancer of the colon and stomach in the early stages has led to endoscopies becoming a means of diagnosis, being increasingly uses as a screening method in the prevention of esophagus-gastric and colorectal cancer.

PNEUMOLOGY
Respiratory Fibroscopy has become a preferred method in the diagnosis of diseases of the respiratory tract, from the larynx to the lungs, allowing specialties such as ENT and Pulmonology to identify infectious pathologies and tumours that would otherwise not be easily detected.

GENERAL SURGERY
This specialty has always been Pioneer in the information, introduction and promotion of this procedure. From the beginning, the surgical procedure most frequently performed using this technique has been laparoscopic cholecystectomy. Rapidly other types of procedures, such as appendectomy, repair of hiatus hernias, morbid obesity surgery, all types of hernias, colorectal surgery among others, have become part of the portfolio of the HPA Health Group and are carried out on a daily basis.
The HPA Health Group, has been pioneer in the Region of the Algarve, as far as this state-of-the-art technique is concerned. The HPA Health Group was the first hospital to carry our highly technical laparoscopic procedures such as esophageal surgery, colorectal and liver surgery, minimally invasive thoracic surgery, including minimally invasive valve and pericardial cardiac surgery, all laparoscopically.

UROLOGY
Laparoscopic surgery in urology has always been a technique of excellence in the treatment of hypertrophy of the prostate as well as cancer of the prostate. The combination of video-laser techniques results in less pain for the patient and fewer cases of haemorragy in the post operative period.
Nephrolithiasis can also be treated by laser endoscopy instead of conventional surgery. The whole procedure is carried out via the patient’s urethra with immediate pain relief, where hospital admission is unnecessary.

GYNAECOLOGY
Laparoscopic surgery is also widely used in gynaecology. Pathology of the ovaries and fallopian tubes are frequently treated laparoscopically. Presenting excellent results less pain and no scars which is so important for women, especially younger women. It has also been used as a backup method for infertility treatment and tubal sterilization.
The HPA Group was pioneer in the first laparoscopic hysterectomy to be carried in the Algarve.

ORTHOPEDICS
Video-surgery is also widely used in Orthopaedics for numerous procedures, from meniscal and ligament injuries of the knee, to cartilage lesions, intra-articular fractures and ligament injuries of the shoulder, ankle or foot.
Continuous optimization of this technique and equipment in the HPA Group, has permitted our doctors to participate in training sessions both nationally and internationally, learning new surgical methods while presenting their own results, thus assenting themselves as a centre of excellence in Video-Assisted Surgery.
At the HPA Heath Group you will find laparoscopic solutions for almost all pathologies, state of the art equipment, medical and nursing teams experienced in the practice of this technique, obtaining the excellent results which we all hope for.
In health care, more technology and differentiation results in less pain and suffering for the patient.